Interacting with a Game Master

If you need to reach customer support, contact us.

A GM will never ask you to do anything that would compromise an account or its personal information.

Communicating With a Game Master

There are three ways a GM can contact you:

Click on the GM Chat Request icon located in the upper right corner of your screen to open the GM Chat Window. This icon only appears if a GM is attempting to contact you, and its border flashes blue when a message is received.

tag next to their names in chat. If someone claims to be a GM, but doesn't have that icon, report and block them.

Note: Some UI modifications can cause the GM Chat Request icon to be invisible. If you don't see it, restore your UI to its default settings.

If a GM can't reach you in-game, or if the issue doesn't need further information, the GM may send an in-game mail to the character that submitted the ticket. You can also see ticket responses on your Ticket Status page. Check both locations before resubmitting a ticket.

Official emails from Blizzard GMs come from noreply@blizzard.com. If you doubt the authenticity of an email from a blizzard.com address, visit our Suspicious Emails and Phishing article for more information.

Rarely, a GM may need to make themselves visible when contacting you. GMs have a tag above their avatar, as shown below. 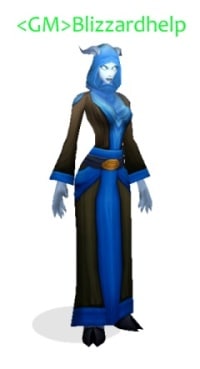 Players that perform the following actions and behavior may receive an account penalty.

Some players attempt to use the authority of GMs to take advantage of others. If anyone claiming to be a GM doesn't match the details in this article, they are not official Blizzard Entertainment employees and should be reported.

Defrauding or Attempting to Defraud a GM

Attempts to defraud a GM include, but are not limited to, misdirecting a GM's attention, withholding information, providing false information, and any attempt to trick a GM.

Do not disobey or ignore instructions from a GM to perform, or restrain from performing, certain actions.

The use of abusive or foul language directed toward the GM Staff is inappropriate and unproductive.

Violating any area of the Terms of Use, including the areas detailed above, will often result in temporary suspension from the game.

Note: If you would like to appeal a penalty placed on your account, please see our How to Appeal Suspensions and Closures article.